The Weedman Family National Reunion was held in Tell City & Bristow, Indiana June 16 & 17, 2006 in an area of southern Indiana and northern Kentucky where numerous Weedman and allied families have lived for over one hundred years. Registration started at 3:00 PM Friday in the conference room where soft drinks, coffee and hors d’oeuvres were served.

Those in attendants at this years meeting:

Each family received a reunion packet that contained the handouts for the photography talk, a Perry County map, pamphlets obtained from the Perry County Chamber of Commerce, and a copy of the Weedman Family Food History & Recipes Booklet. Every one should thank Helen Gregg, Jesse & Jerri Weedman, Myrtle Weedman Kenyon, Jan Bruner, Jane Weedman Horne, Keith & Melissa Weedman Coots, Sue & Kenny Weedman for the recipes and family history they provided for the publication.

The opening program consisted of dating and identifying the people in our old photographs using various techniques. To locate the time period of each photograph, the audience was given handouts of clothing styles including:

A one page outline for American photographic history was also given to participations. This outline helped identify camera styles and processing. Listed below:

Verbal tips that were given consisted of the following: Automobile dates, keys to the seasons, no leaves on trees i.e. winter, Photographer’s studio name on the card backing can be traced for dates, the dates of the oldest and youngest people in the photo can give a date range, to check the back of the paper for dates, numbers, developers et al, the background of the image (real or painted), if real where, and remembering the person you do not see in the picture (the photographer). With the information in hand the participants dated twelve photographs.

The Friday night program moved to reports on recent research which follows: Bill & Pat Weedman had just returned from Germany and although they went through church records and obtained much needed research help it appears to have been in vain as the Christian Widman in question was dead before our relative arrived in the new world, Nick Weedman had nothing to add to the follow-up on passengers of the Ship Anderson, Gena Lee Theiss said she had been doing very little research of late and I had found that Christian Widman appeared in the tax list of 1750 for Philadelphia and a statement by one Anthony Weedman, a minor son of Daniel Weedman, was given for a law suite in Perry County, Indiana.

The remainder of the evening was spent visiting and looking at photographs that need identification of some type and others visited the snack bar early and often. 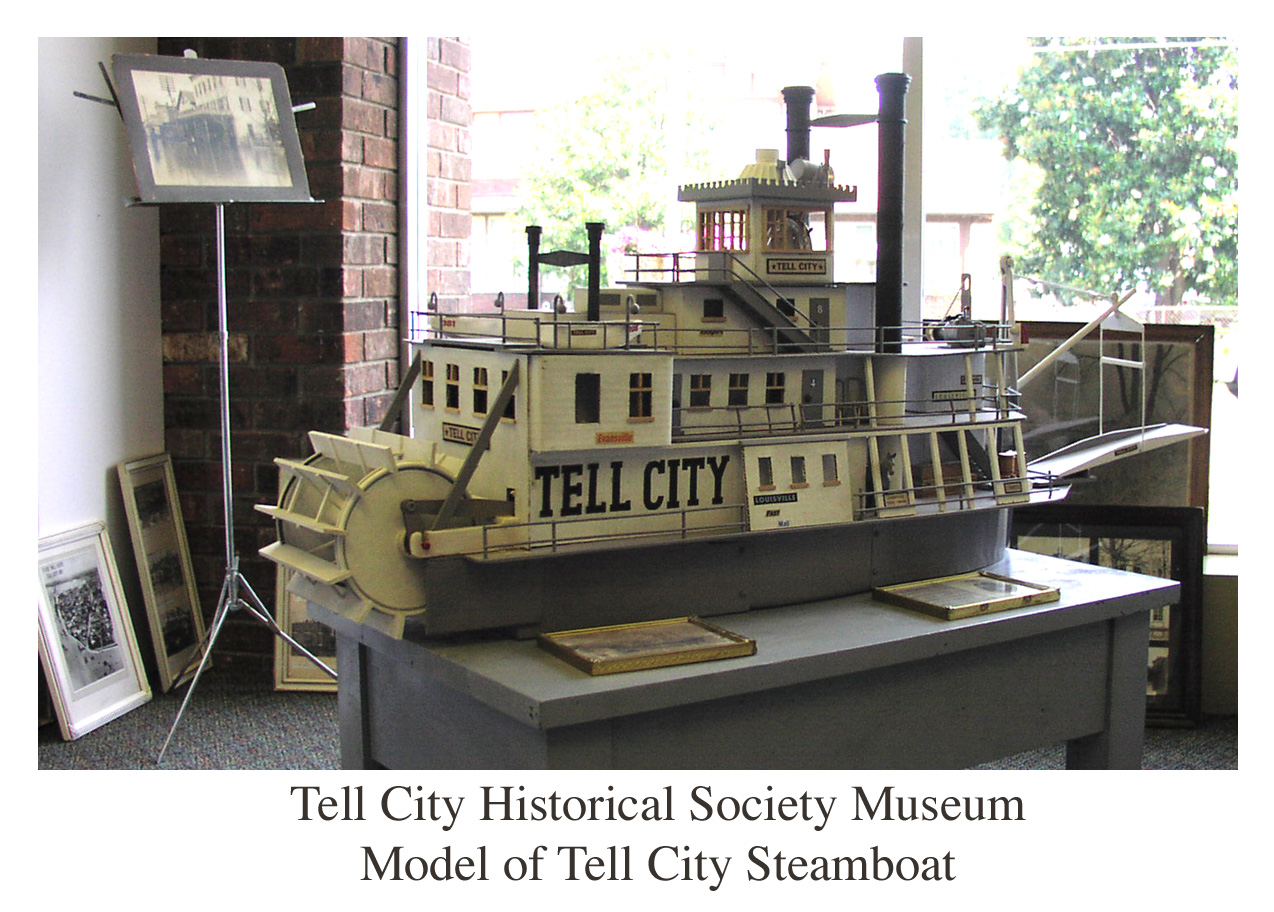 Saturday morning at 9:45 AM we gathered in the conference room for a convoy down to Franklin and 9th Street for a private tour of the Tell City Historical Society Museum and Library. One of the first objects encountered was a wonderful giant rocking chair that was used in the sale of furniture made in Tell City.

The museum has a large collection of historical photographs from the area, many of which have been cataloged and organized in albums by category, which many of our group perused. Mannequins dressed in period clothing related to our photo identification lesson of the night before.

There was a very nice display on nineteenth century Ohio River steamboats, including a model of the steamer Tell City. This boat model included small people on the deck and one of the children present ran over to play with this wonderful toy boat!

For any one interested in joining the Society, send a check for $10 to: Tell City Historical Society, P.O. Box 728, Tell City, IN 47586. It was very kind of the four volunteers who gave their time to open the Museum for the Weedman Reunion and we very much appreciate their work.

As the caravan of reunion cars went through Bristow, all could see men diligently working at their grills. We could almost smell the food as we passed by an unknown building and some were heard to say "Now that’s where we should have lunched". But the caravan carried on down Huffman road to the nineteenth century Covered Bridge where the clan enjoyed the craftsmanship of the carpenters that erected the Burr Arch Truss structure. After taking group photographs at the entrance on the Perry county side of the bridge the family was informed that the grills were indeed at the location that we were to enjoy lunch.

An excellent buffet lunch of grilled meats, homemade vegetables and deserts was provided at the Bristow Community Center through the generosity of Carl Weedman, a former Bristownian. After Carolyn Weedman Springer said a prayer we partook of a great meal before we reloaded the vehicles for a tour of some cemeteries. 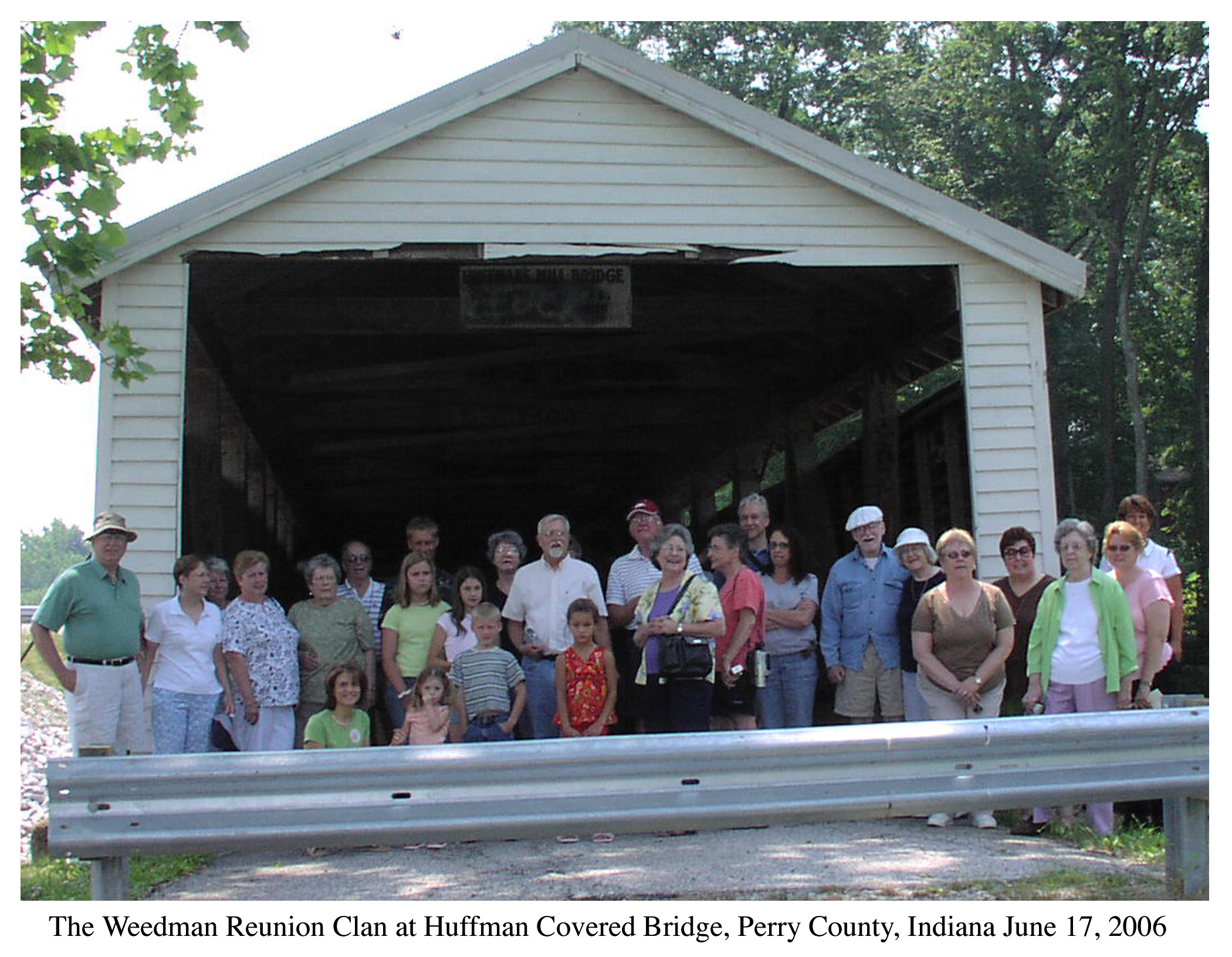 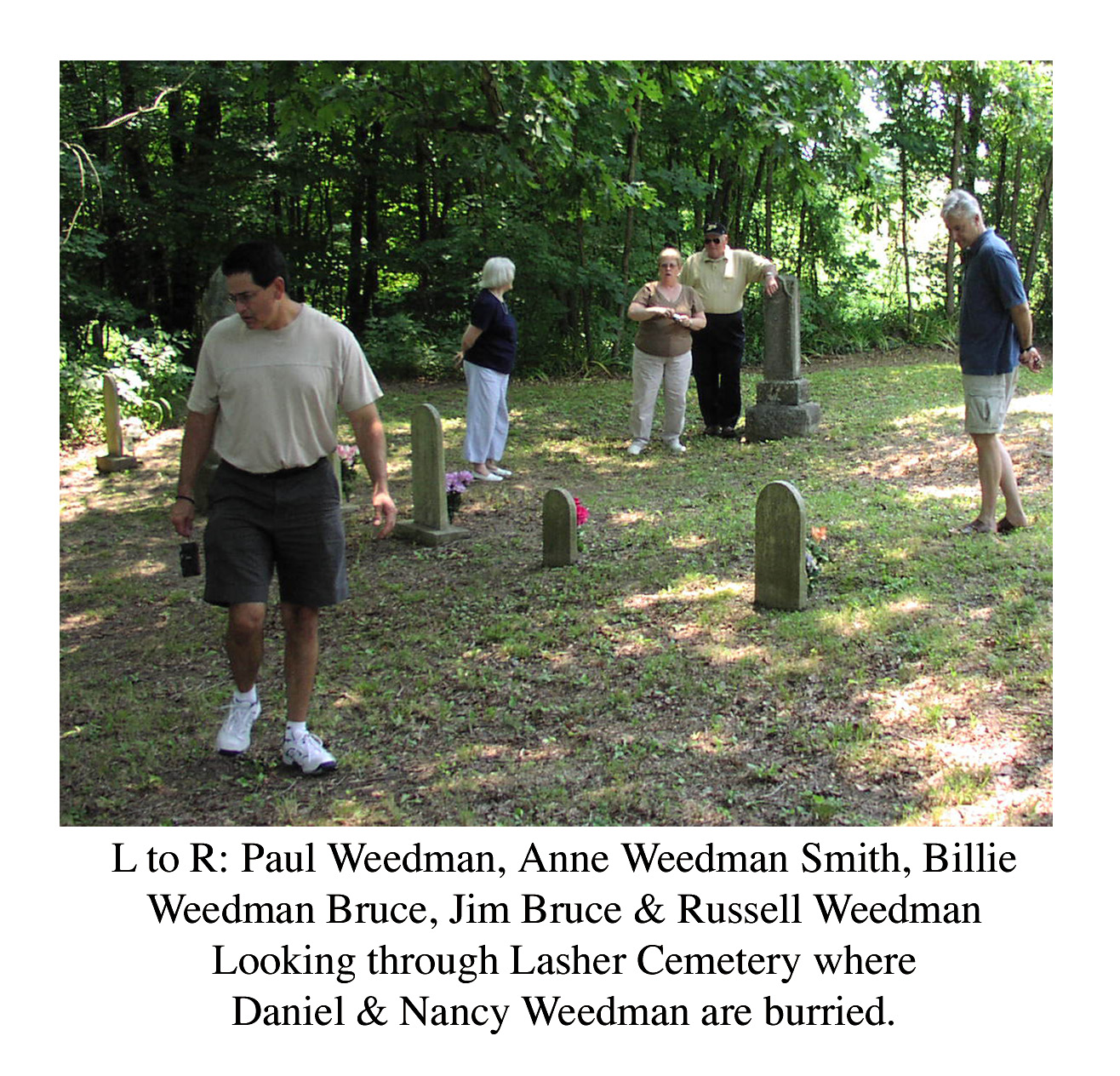 At the top of the hill off Hwy 145 is Bristow Cemetery where many Weedman and related family members are buried. Nick Weedman spoke to the group on the Weedman and related families interred at Bristow. Some of our relations whose graves we visited here were William T. Weedman 1855 – 1929 (the earliest relative born), Mary L. Weedman the second wife of Wm T. Weedman, James J. Weedman, Sarah Ellen "Sadie Weedman", Oscar D. Weedman a vet of WWI and his son Clinton D. Weedman a vet of WWII, Maxine and Maxum children of O.D. & H. Weedman and Fred & Elizabeth Lehmkuhler.

We continued up Hwy 145 to Lasher Cemetery where the group looked upon the graves of Daniel Weedman 1801 – 1854 and his wife Nancy Spurrier Weedman 1801 – 1868, Nancy J. Weedman, George Weedman born in 1823 and lived 74 year’s and 16 days which was well beyond normal for that time, John Weedman who made it for 65 year’s 1 month and 18 days and Delina wife of Thomas Huff, the earliest graves we visited Saturday.

Lastly we back tracked through Bristow down Hwy 145 to Isadore road to visited Saint Isadore cemetery which lies adjacent to the church of the same name. Here we find interred Walter A Weedman 1828 – 1880, George W. Weedman and Henrietta I. (Cassidy) Weedman 1839 – 1893 the first wife of W.T. Weedman. On the way back to Hwy 145 an enormous turkey strutted down the road while a doe grazed beside the road and luckily neither of them wanted to hit any of our cars and we turned onto Hwy 37 returning safely to Tell City.

Back at the Holiday Inn Express, the kids went swimming while the adults relaxed or visited in the conference room.

At 6:15 PM people started arriving at the Hoosier Heights Country Club for the Reunion dinner which started almost sharply at 6:30 PM. The dinner was opened with a prayer by Cliff Weedman and continued with "Happy Birthday" lead by Emily and Erica Cooks grandchildren to Sue Weedman whose age you will have to look up. Next up on the agenda were the door prizes. After all the names were placed in a cup, Emily Coots drew the names of Ed Smith and Jan Bruner as the winners.

The dinner tables were set with mugs displaying the family crest and "Weedman Family National Reunion Bristow & Tell City, IN June 16, 17 and 18, 2006." Weedman address books were given as favors to attendees. We were served tossed salad, prime oven roasted pork with great scalloped potatoes, home cooked green beans, and corn topped off with apple pie and chocolate cake. Carl Weedman was inducted into the Weedman Hall of Fame by Nick Weedman and will be sent a certificate as soon as possible.

We adjourned the dinner around 8:30 PM and continued visiting in the conference room until around midnight.

After breakfast Sunday morning all said their goodbyes after another enjoyable reunion which we will continue in two years in Uniontown, Fayette County, Pennsylvania. 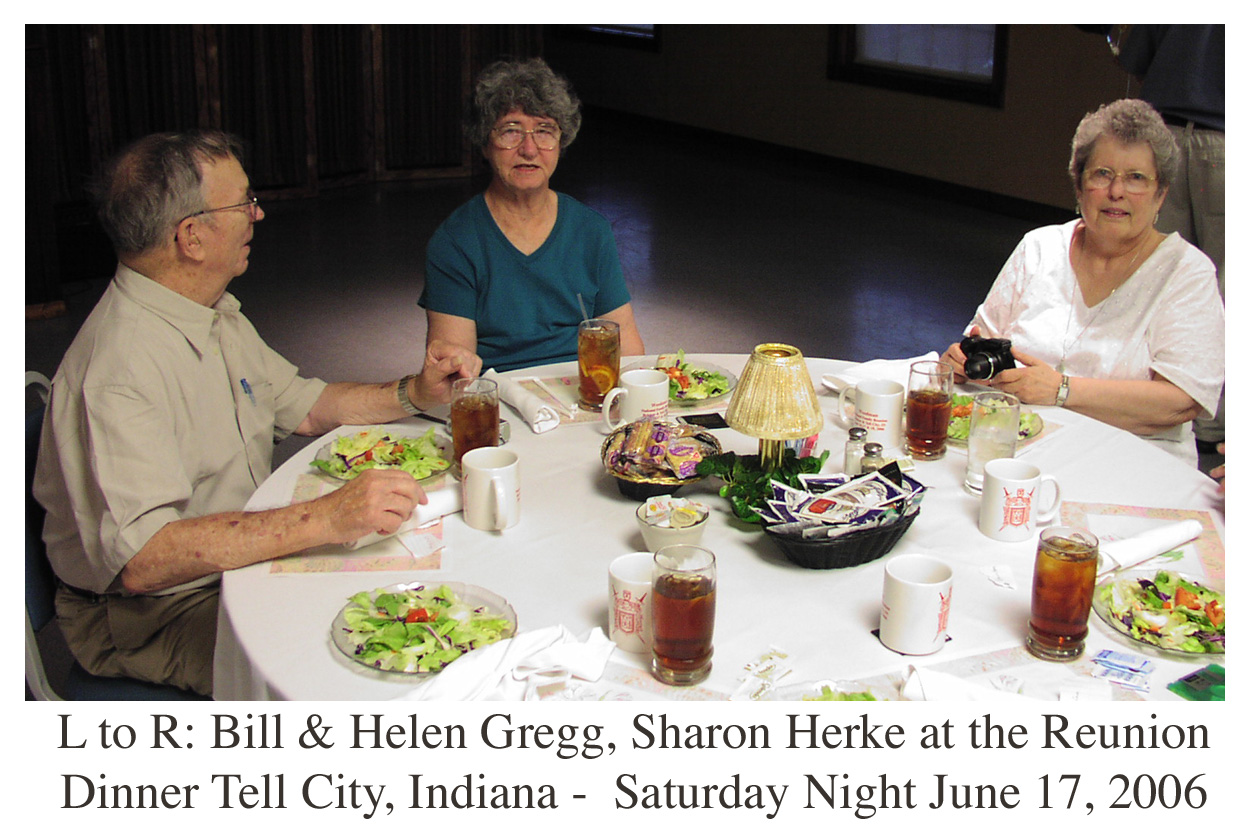