This page has a variety of content which may be of interest to readers.

Philip filed a claim as a result of actions in the War of 1812 in which he claimed his plantation was burned, horses taken, personal effects taken and cedar timber either burned or taken. While this document has no genealogical information, one revealing aspect was that he was a surgeon and his surgical tools were taken. There had been no previous information to the effect that he was a surgeon. He filed a claim for compensation and prevailed.

We had an opportunity to meet new family members in late January, 2003. Visiting from Alaska were Eleanor Roehl and Natalie Ezwiler, both of whom live in Anchorage. They are daughters of Richard T. and Golina (Wassily) Weedman. Richard, now deceased, was in the Air Force stationed at Elmendorf Air Force Base and while there, met Golina, who is a native Alaskan. There were seven children of this marriage including Eleanorand Natalie.

For some time, there has been a desire to meet Weedman family members with whom little contact had been made. In the meantime, in Sandusky, OH which is where Richard was from, some of the cousins of the Alaska Weedmans were getting started on genealogy and found this web site. Inquiries were made and the two branches of the family were put in contact with each other.

Vicki (Taylor) Kimberlin, a daughter of Rose Marie (Weedman) Taylor invited Natalie and Eleanor to Sandusky and they arrived on January 30th for a brief visit.

Stories of life in Alaska in the village of New Stuyahok proved most interesting! And, we were told their brother, Tom Weedman, won the Newhalen/Iliamna Winter Carnival Memorial Sled Dog Racein 2002 and this was on the Internet.

Also greeting the visitors from Alaska were sisters of Vicki that included Judy, Becky, and Diannaas well as their uncle,Ronald T. Weedman of Sandusky. 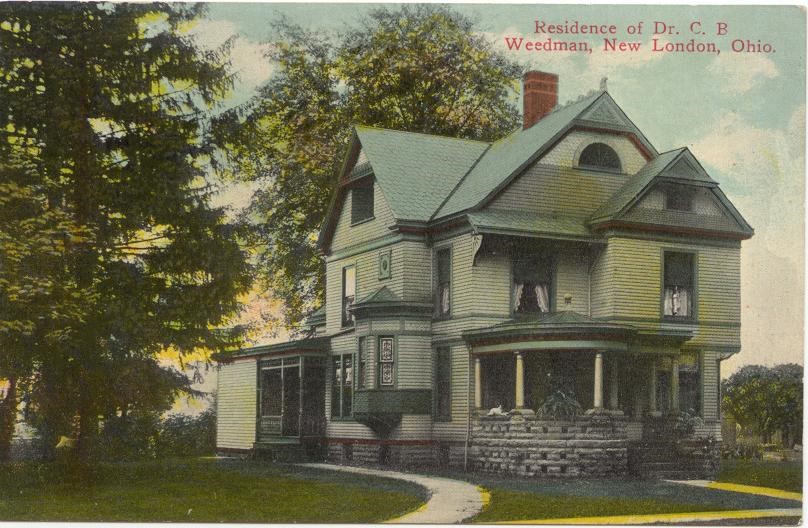 The photo above is a post card purchased on E-Bay. We now have it in the family archives. Date Unknown.

Dr. Charles Benton Weedman was born 26 January 1858 in Ashland County, Ohio the son of Dr. George W. and Sophronia (Richards) Weedman. Dr. Charles Weedman was a graduate of the Case Western School of Medicine and practiced in New London and Wellington as well as other communities in Ashland and Huron Counties, Ohio. He married Lucy Iona DuBois on 25 August 1880. Two children were born to this couple: Donald Vincent and Elizabeth S. Weedman.

Dr. Charles B. Weedman died 13 May, 1939 and is buried in Ridge Hill Memorial Cemetery, Amherst, Ohio.

His grandparents were Jacob and Catherine (Bishop) Weedman. They were married in Perry County, Ohio on 11 February 1819 and Jacob died there about 1829. Jacob's parents, George and Charlotte Huhn Weedman, left Perry County, OH in 1829 and moved to McLean County, IL. Catherine, the young widow with six children, moved to Ashland County, OH where she raised the family. This family produced a number of medical professionals and, as a result, Catherine Bishop Weedman was named to the Weedman Family Hall of Fame at the 2000 Weedman National Gathering held in Farmer City and Weedman, Illinois.

This undated newspaper article from the Memphis Commercial Appeal is an interview with Williard Rieves Weedman of Marion, AR. The article contains a picture of Mrs. Weedman.

Links to Other Sites of Interest to Weedman Researchers